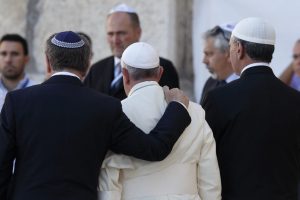 Opening the Holy Door of St. Peter’s Basilica and the Year of Mercy, Pope Francis also hopes to open a year of “fervent dialogue” among Christians, Muslims and Jews, so that all who profess faith in a merciful God may be stronger in showing mercy toward one another.
The opening of the special jubilee year just a month after the terrorist attacks in Paris and at a time of continuing strife in the Holy Land and around the Middle East shows the size of the challenge facing those committed to interreligious dialogue, but it equally shows the need.
In his official proclamation of the Year of Mercy, Pope Francis noted that the Christian profession of faith in God’s mercy “relates us to Judaism and Islam, both of which consider mercy to be one of God’s most important attributes.”
He prayed that the jubilee would “open us to even more fervent dialogue so that we might know and understand one another better; may it eliminate every form of closed-mindedness and disrespect, and drive out every form of violence and discrimination.”
The Pope goes on to say: “There is an aspect of mercy that goes beyond the confines of the Church. It relates us to Judaism and Islam, both of which consider mercy to be one of God’s most important attributes. Israel was the first to receive this revelation which continues in history as the source of an inexhaustible  richness meant to be shared with all mankind. As we have seen, the pages of the Old Testament are steeped in mercy, because they narrate the works that the Lord performed in favour of his people at the most trying moments of their history. Among the privileged names that Islam attributes to the Creator are “Merciful and Kind”. This invocation is often on the lips of faithful Muslims who feel themselves accompanied and sustained by mercy in their daily weakness. They too believe that no one can place a limit on divine mercy because its doors are always open. ” #23 Bull of Indiction of the Extraordinary Jubilee of Mercy
Read more here
Tags:Jubilee of Mercy